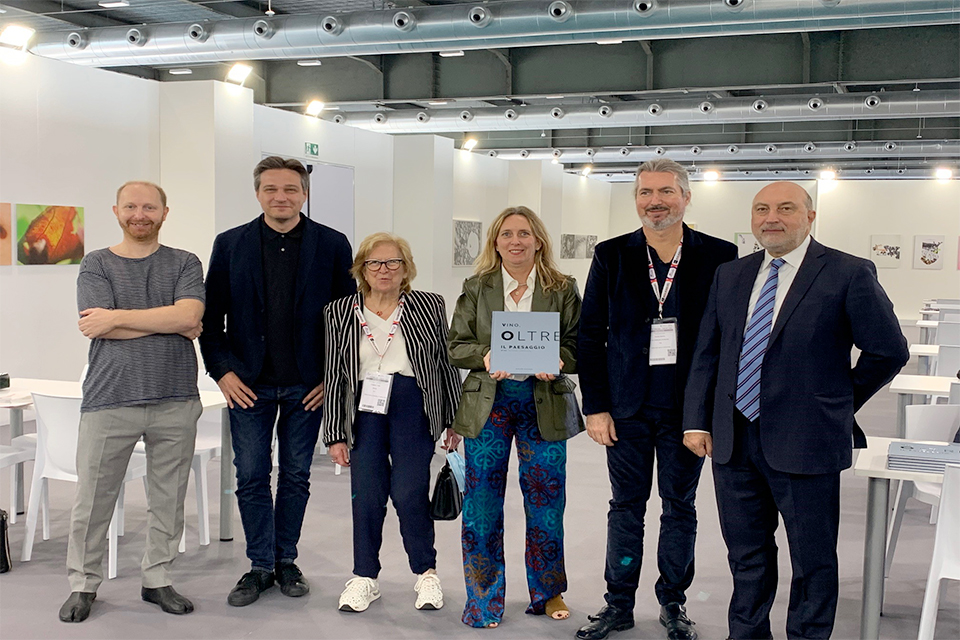 the photographic exhibition "Wine. Beyond the landscape" by Zenato Academy

On Sunday, October 17, the photo exhibition "Wine. Beyond the Landscape," the second experience of Zenato Academy's cultural project.

The exhibition was set up in the pavilions of Vinitaly, in conjunction with another important fair, ArtVerona, dedicated to the enhancement of modern and contemporary art and the Italian art system.

"We decided to participate in this Vinitaly with a project that goes beyond the classic communication of wine," says Nadia Zenato, "and the beyond is precisely the main theme of our project but also of our vision: to see, to act, to think in order to overcome limits, for our company, but also for our territory. "And today we find ourselves here, in Verona, in the place of convergence of two events so important not only for our city but for the whole Italian system, Vinitaly and ArtVerona. It will be precisely the ability to work as a system that will make the difference. That ability to generate visions, that momentum toward a better future to be built together, the creativity in finding alternative solutions will be the pillars of the change to come. I thank Ente Fiera in the person of Gianni Bruno and ArtVerona in the person of artistic director Stefano Raimondi for being here with us today to witness this common commitment," concludes Nadia Zenato.

The exhibition "Wine. Beyond the Landscape," curated by critic Luca Panaro and lecturer Martina della Valle, was created in collaboration with five students from the f/16 Schule für Fotografie school in Berlin and is the second experience of Zenato Academy's "Beyond" project.

The exhibit will also feature the five most representative works of the work of the students of the Brera Academy of Fine Arts in Milan, with whom the first project, "Wine. Beyond Objects."

"The theme chosen for this second edition of the project is landscape, understood as a source of knowledge, a noble and silent witness of wine production"-explains Luca Panaro. "The choices made by each student and the imprinting provided by the school led the five students to interpret the given theme in an original way, in the desire to go beyond the traditional iconography of the landscape through the imaginative power of photography."

"Setting aside the political desire to own places, as well as the desire to monitor changes in the urban development of a metropolis," Panaro continues, "photography is free to operate on several fronts. There are those who decide to interpret the landscape by asking for help from ancient techniques to readapt them to current aesthetics, as in Lisa and Stefanie Dollhopf's off-camera experiments and collages. Those who instead choose to use photography as a laboratory to experiment with the increasingly blurred boundaries between reality and fiction, this is the case with Lara Sapper. Others make their own the close-up gaze that characterizes our times, aided by the use of technologies that allow for close-up investigations, such as the observation of the human epidermal surface and the scientific analysis of the soil on which a shrub plant grows, aspects explored in the images of Jorge Garrido and Marina Villanueva."

"The Zenato Academy project," concludes Nadia Zenato, "was created with the aim of supporting young artists and stimulating them to interpret, through photography and the language of video and new media, our world of wine, with a new and innovative look. The next experience, which will start at the end of the month, will involve students from the Modena Visual Arts Foundation, waiting to be able to continue with the involvement of a U.S. and an Asian school."

From Nov. 4, the exhibition will be on display at Tenuta Zenato - Strada Santa Cristina, 10 Peschiera del Garda (VR) - by appointment